So Matt's running has been going well lately.  He has qualified in two events at Nationals and has been having some good track workouts.  On Sunday he ran in the StarKids 5K near our house with Karl, who has graciously guided Matt several times.  I've probably said it before, but Karl running with Matt is like Matt running with me -- going out for a leisurely run.  Karl competed in Olympic trials in 2008 so he knows well what Matt is going for and competing against to try to make the U.S. Paralympic team for Rio.

Matt came in third last year at the StarKids 5k and he wanted to run it again this year not only because they have generous prizes, but also because it is a very well put together race that is super family friendly and raising money for the Inova Children's Heart Program.  Our kids are too little, but there was a giant bootcamp inflatable obstacle course and a huge rock climbing wall.  There was also a fun run that Marisa wants to run in next year she said.  My only challenge of the morning was navigating the porta-potties with three kids.  There were about thirty people in front of us in line.  Thankfully the line moved quickly no thanks to the couple that cut in front of us.  After the race we got to meet Ariel and Spider-Man AND get a free scoop of ice cream.  We also lucked out with great race (and spectator) weather.  All of that would have been enough, but to top off our morning Matt won the race, which came with a $500 Visa gift card.  Matt has to cross the finish line ahead of his guide so that meant that Karl came in second and won $250.  Not bad for less than 18 minutes of racing, right?

Matt knew he needed a guide on this course.  He ran it last year and there were several places where he either started turning too soon or missed turns.  If Karl hadn't been there, this year's challenge would have been the orange safety cones.  They had them in the middle of the lanes to show where the turns were and to stop cars, but if he overshot a turn Matt would have run right into them.  Matt finished in 17:52 (which is a big improvement over last year's 18:33).  It is a hilly course and he had done a pretty hard speed workout two days before so he was mostly pleased with his time.  He was hoping to have it start with a 16, but that is probably more achievable on a track than on a hilly road race.  Matt and Karl were in the lead from the very beginning.  Check out some of the photographs from the morning.

A huge thank you to Karl for pushing Matt and making sure he didn't run into anyone or anything! 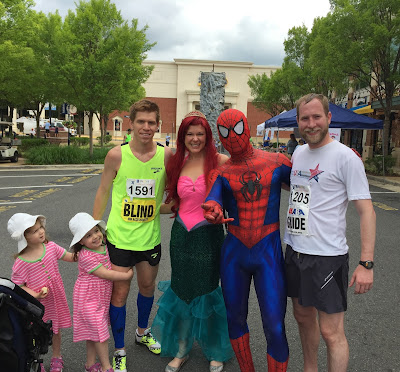 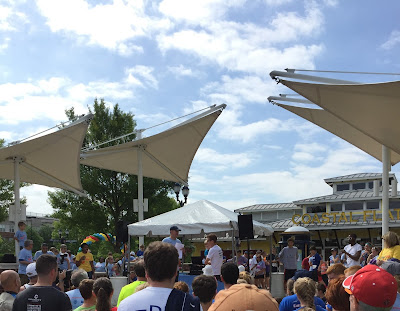 Posted by Daddy's Blind Ambition at 10:40 AM