The U.S. Paralympics Track and Field National Championships will be held June 19-21, 2015, at Hamline University in Minnesota.  The June event is a selection event for athletes that want to compete in the International Paralympic Committee Athletics World Championships this fall in Doha, Qatar.  However, to compete in Nationals all athletes must meet qualification standards.  Matt would like to compete in both the 1500 and the 5000 at Nationals, but decided to start by trying for a qualifying time in the 5000.  NCAA track meets are qualifying meets so on Saturday, Matt completed in the Gallaudet University Invitational at Gallaudet University in Washington. DC.  It was a Division III Track and Field competition with athletes from Catholic University, Gallaudet University, Goucher College, Hagerstown Community College, and Hood College.  Just to point out the obvious, that means that Matt was racing against runners between 13 and 17 years his junior.  (I don’t think he liked it when I pointed that out while we waited for the race to start.)  Matt had reached out to the Gallaudet running coach a few months ago asking if he would open up the meet to Matt so he could attempt to qualify.  Coach Moore graciously agreed and made it seamless for Matt to compete.  Not all of the local universities have agreed to let Matt run – in fact some haven’t even responded to his requests – so we were very excited to have this opportunity and are very grateful to Coach Moore.  I might have been more nervous than Matt on Saturday since I had never seen Matt compete in a track event and had no idea what to expect.  I had also never been to Gallaudet University.  It is a very nice campus with a beautiful new track.  For those of you who may not know, Gallaudet is a university for deaf and hard-of-hearing students.  It was the perfect location for Matt’s first track meet on his road to Rio.

As you may recall, Matt injured himself at the California International Marathon in December and had to start physical therapy.  Not only did Bodies in Motion help his injury heal, but one of the physical therapists, Matt Barnes, is now his coach.  He’s been having Matt run less, but a lot harder.  The approach to Saturday’s meet was simply to qualify.  The Nationals’ qualifying time in the 5000 meters is 18 minutes or less.  His coach recommended he keep it conservative and run 5:40 miles.  Since there is no watch to speak splits and because Matt is unable to read the race clock, I stood by the fence and called his splits.  He needed to average between 83 and 85 seconds a lap for all 12 and a half laps.  Our friends and former neighbors, Matt, Jen, and Sean came out to the meet to help cheer on Matt and also served as official race photographers since I was yelling splits.

Seven athletes, including Matt, raced in the 5000.  I tried to remind Matt before the race not to keep up with the lead runners if they go too fast since he was really only racing against the clock and not any of the runners.  The race weather wasn’t ideal – between the temperature and wind chill it was close to freezing for the race.  He opted against a singlet and wore a short sleeve shirt, shorts, hat, and gloves.  I stood at the finish and started my clock when Matt passed me a half lap in. 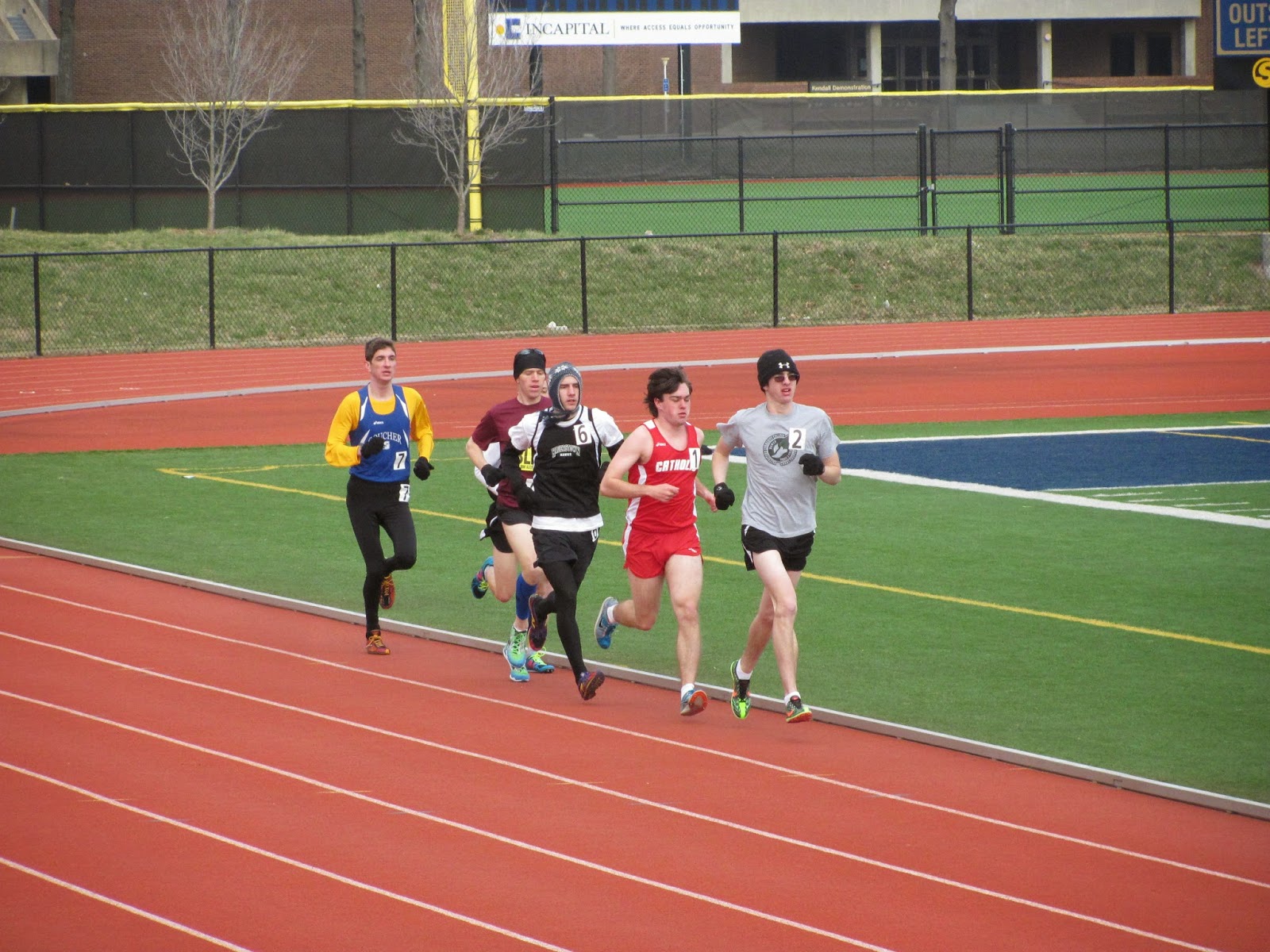 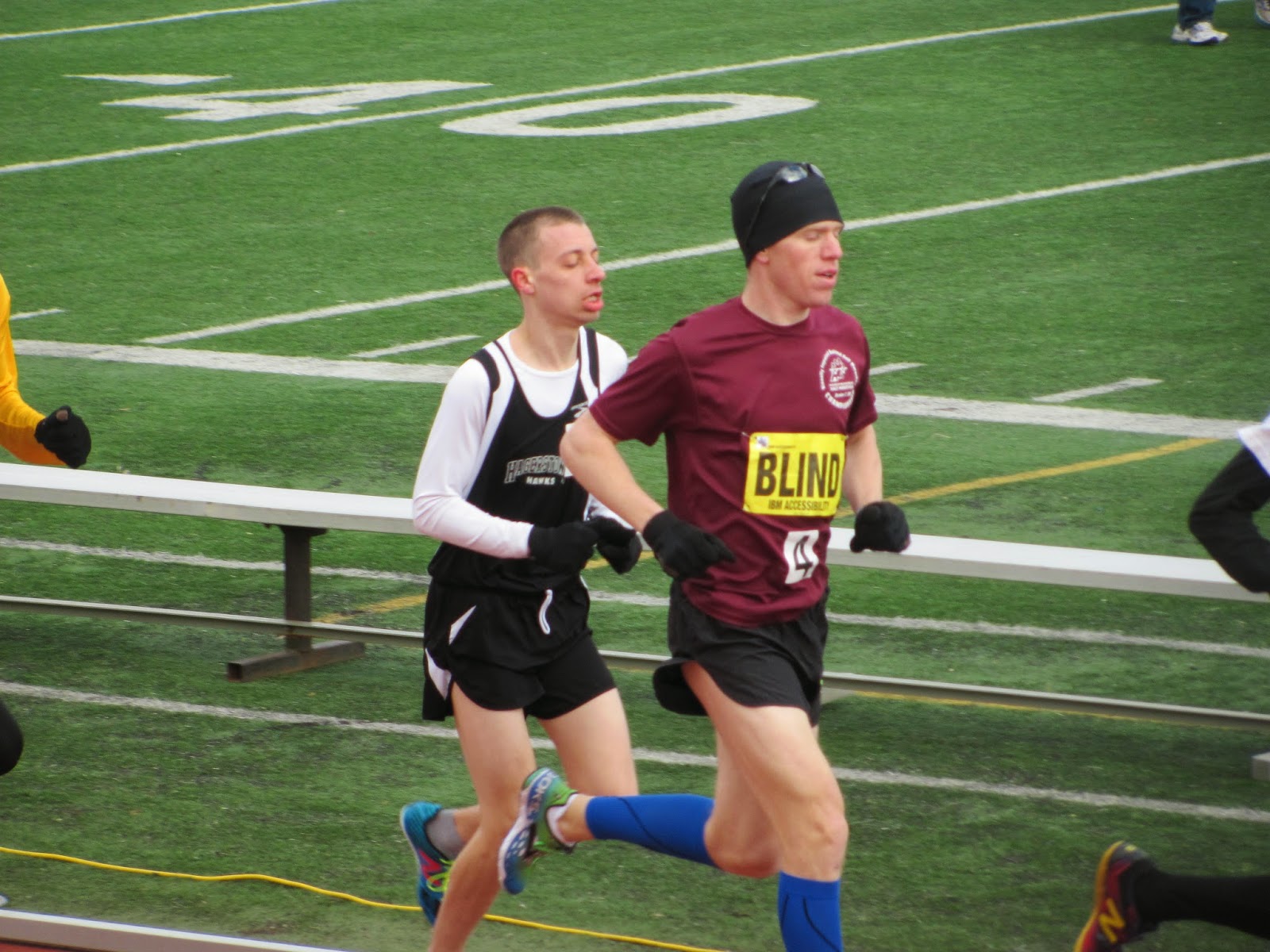 In case you are wondering what his overall time was, it was 17:37.  He did it!  He qualified for Nationals in the 5000 meters!  AND, he came in third!  (The winner ran a 17:06.)  Some of the runners came up and congratulated him and shook his hand afterward.  Even though I was calling his splits, he messed up the math in his head and thought he was over 18 minutes and was disappointed until he heard his final time.  Then the excitement hit him.  I am so glad I could share this day with him.  It was also great to have Matt, Jen, and Sean out there to share it with us, too.  Thank you for braving the cold with us!  Also, a huge thank you to Coach Moore for opening up the race for Matt!!

Now that Matt has qualified, he can focus on training.  If he gets approval, he’ll compete in the University of Maryland Twilighter on May 1st in both the 1500 and the 5000.  That way, if he doesn’t have any energy left after the 1500, it won’t affect his chances of racing the 5000 at Nationals.  Come help us cheer on Matt in May!