I don’t know how things are in your house, but in my house it is a really big deal to get the mail.  The girls love to ride their little tricycles down the driveway and alternate days to open the mailbox and pull out the mail.  Zachary isn’t as fast getting down the driveway so he usually waits until he gets a piece of junk mail to play with.  But the only thing better than getting mail from the mailbox is if we receive a box.  Last month we got several small packages in one day and it was a family affair to bring them inside, guess what might be in there and who it might be for, and then to finally open it.  What does it have to do with running you might ask?  A lot!  Each little package contained new running gear for Matt compliments of Brooks Running.  Yep, FREE running gear!  How awesome is that?!  As I have lamented in several posts now, Matt is a creature of habit in his running attire.  Unless you look closely at his bib number, you might think the photos are all from the same race. But no, the fact is that he wears the same Brooks singlet, shorts, and racing flats in every race.  Well now we have a new uniform for Matt to wear!  Brooks sent Matt a singlet, shorts, racing flats, running jacket, AND running pants.  He’s set for all seasons!  The color scheme is neon yellow to boot which increases his visibility to others.  The girls took turns walking and sort of galloping in the shoes and then after a few near breakdowns that one sister wasn’t sharing, they each got one shoe to wear and held races in the hallway.  I’m not sure how much Zachary cared about the content of the packages, but he loved sitting on the boxes, opening the boxes, putting toys in the boxes, and even using one of them as a hat.  I think we had about two hours’ worth of entertainment, which to three little kids is priceless.  Below are a few pictures to document our evening.  Thank you Brooks Running for helping support Matt’s journey to Rio.  Even if he doesn’t make it, he’ll be well dressed! 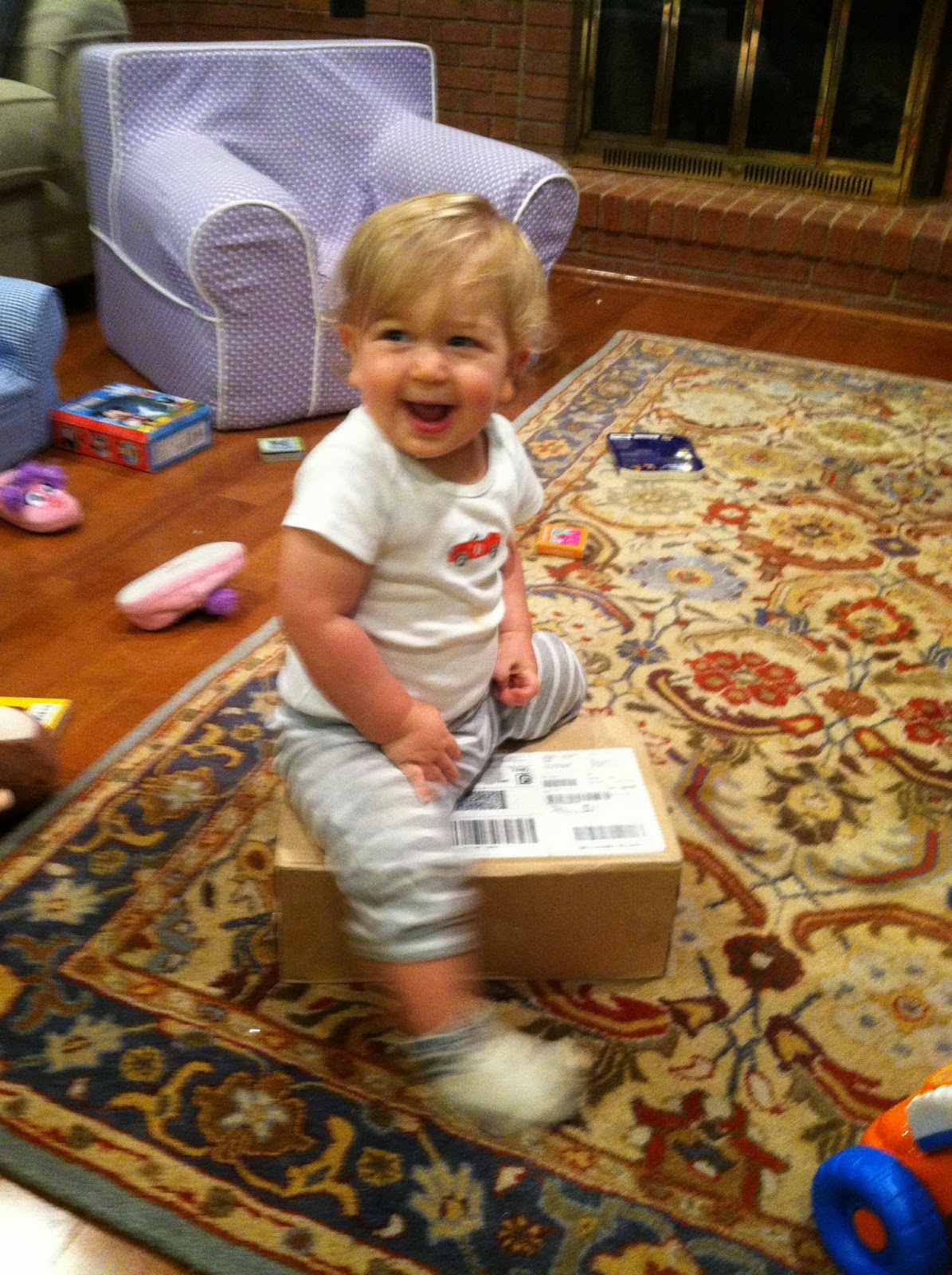 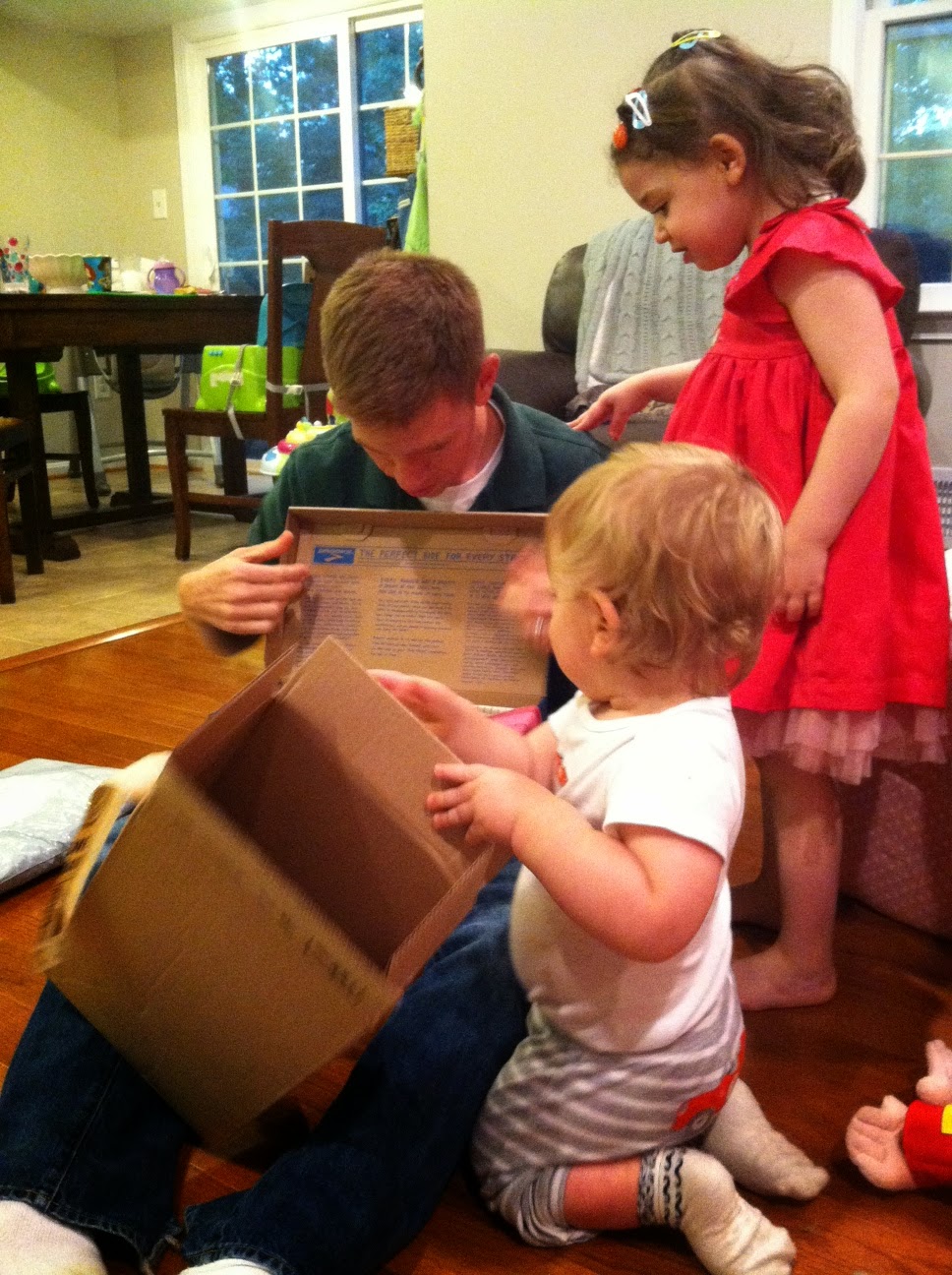 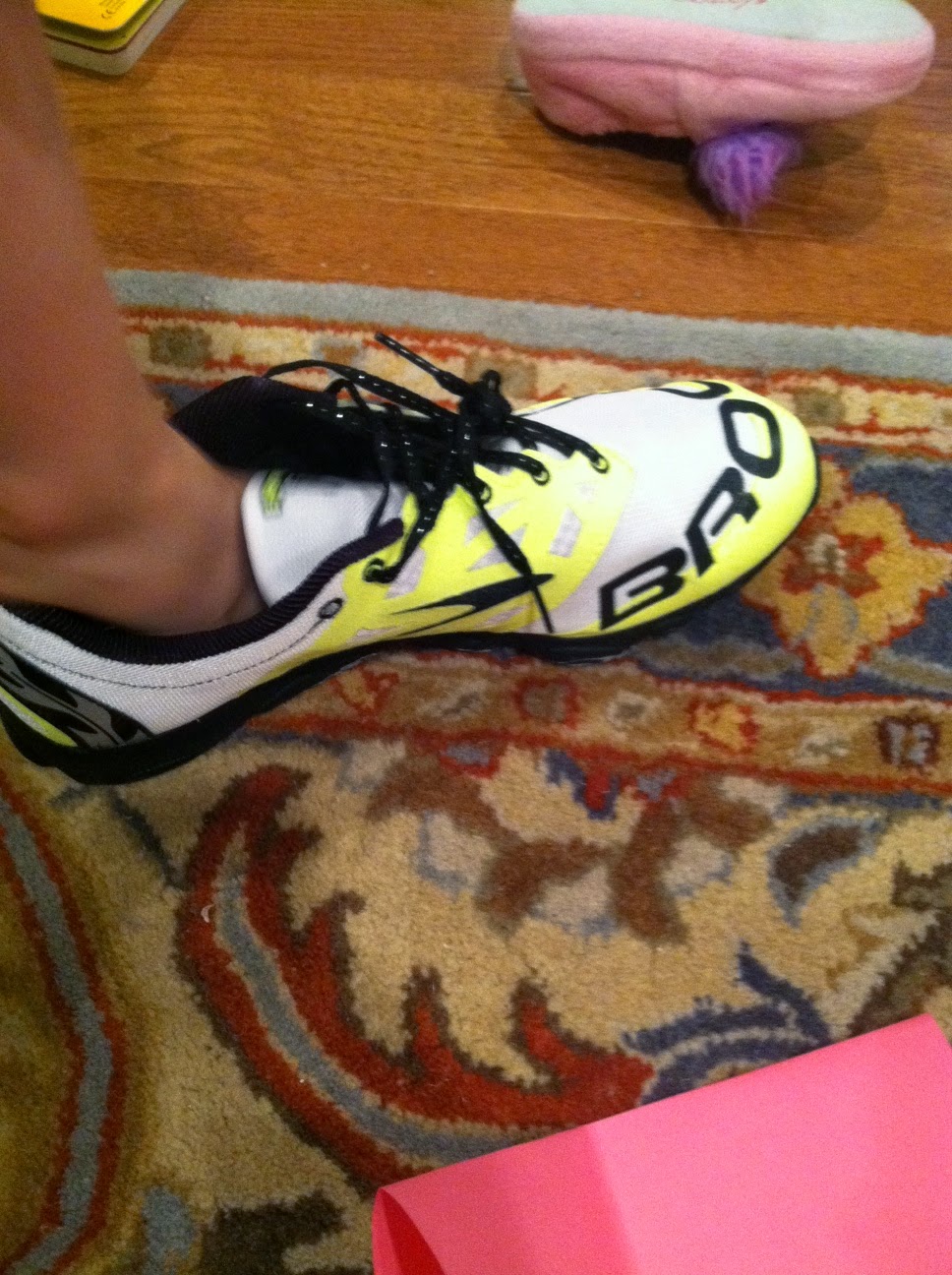 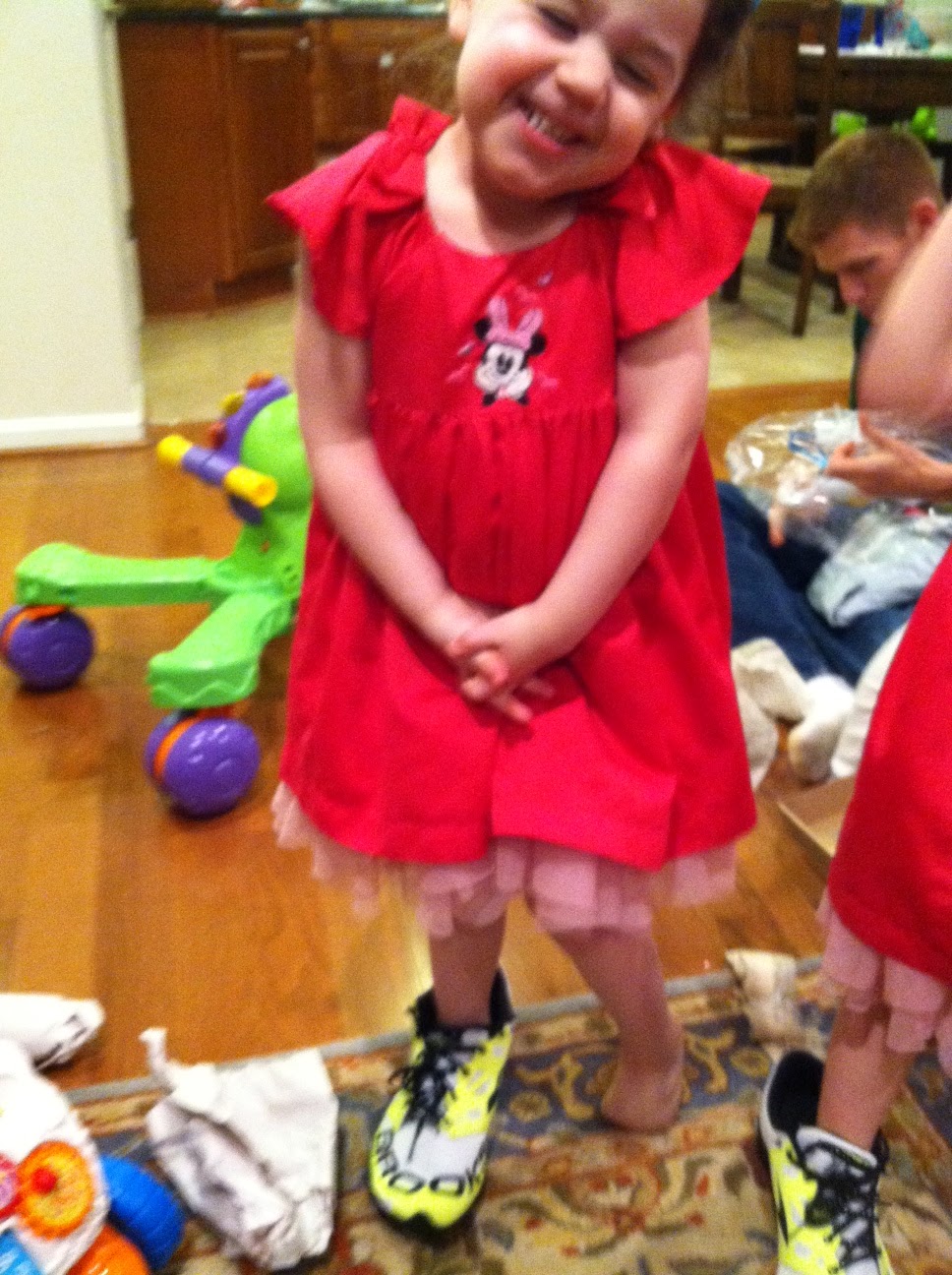 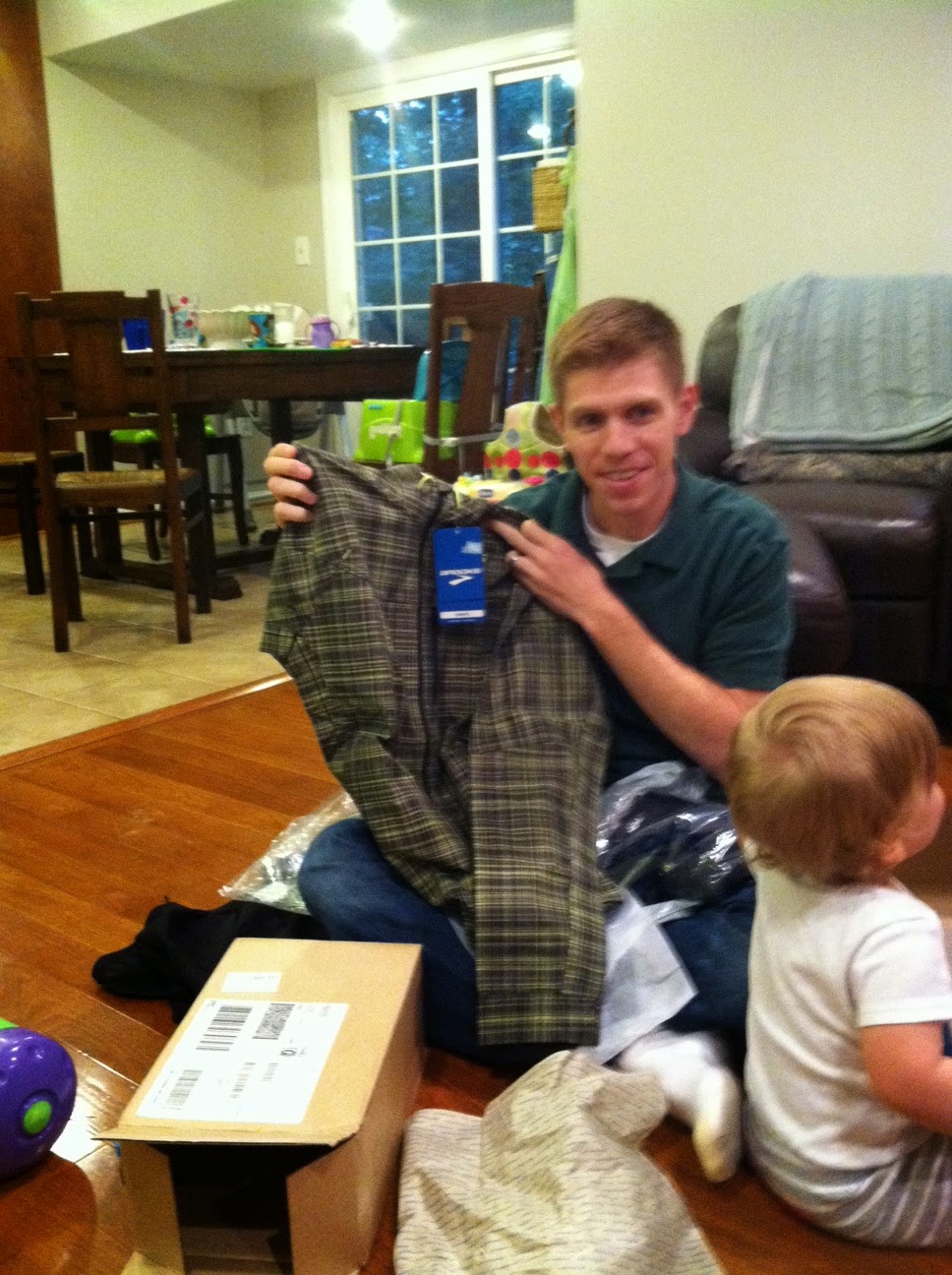 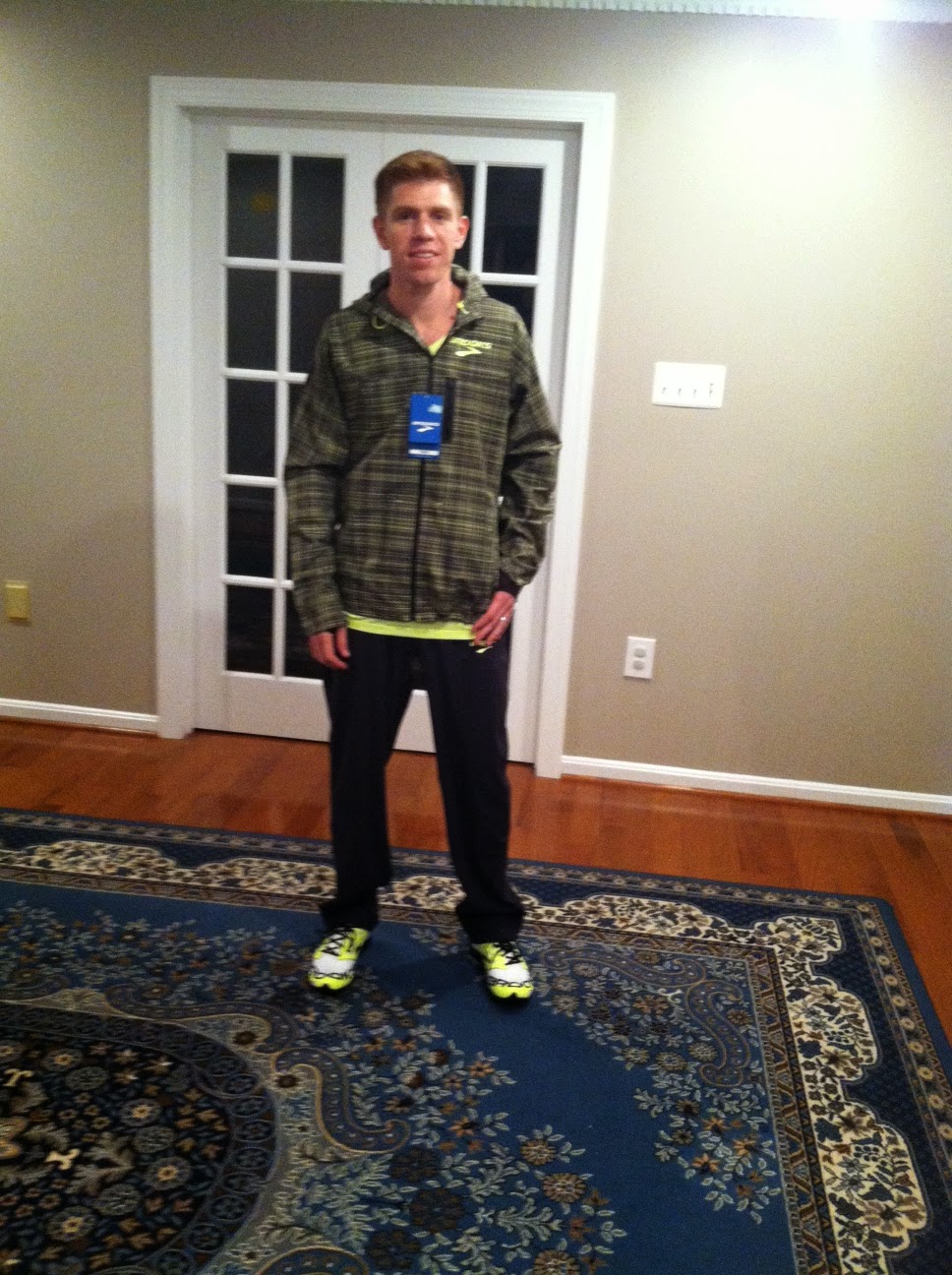 P.S. About the same time that these packages came, Matt order himself a pair of racers to wear in the marathon.  (The racers Brooks sent him are geared for the 1/2 marathon and below.)  Although he commented that the racers (also by Brooks) fit snug, he decided to give them a try on a seven mile run.  He said they didn't hurt when he ran, but wasn't completely sold on the shoe.  Upon further inspection he realized that the racers were actually a size 9 1/2 instead of his size 11.  Um, I'd say those must have fit snug.  He returned them for his appropriate size.  I'm not sure his vision can be blamed for him ordering the wrong size.
Posted by Daddy's Blind Ambition at 2:22 PM